Feel free to download and use the below photo. Please give credit to the photographer, Dane Abernathy. 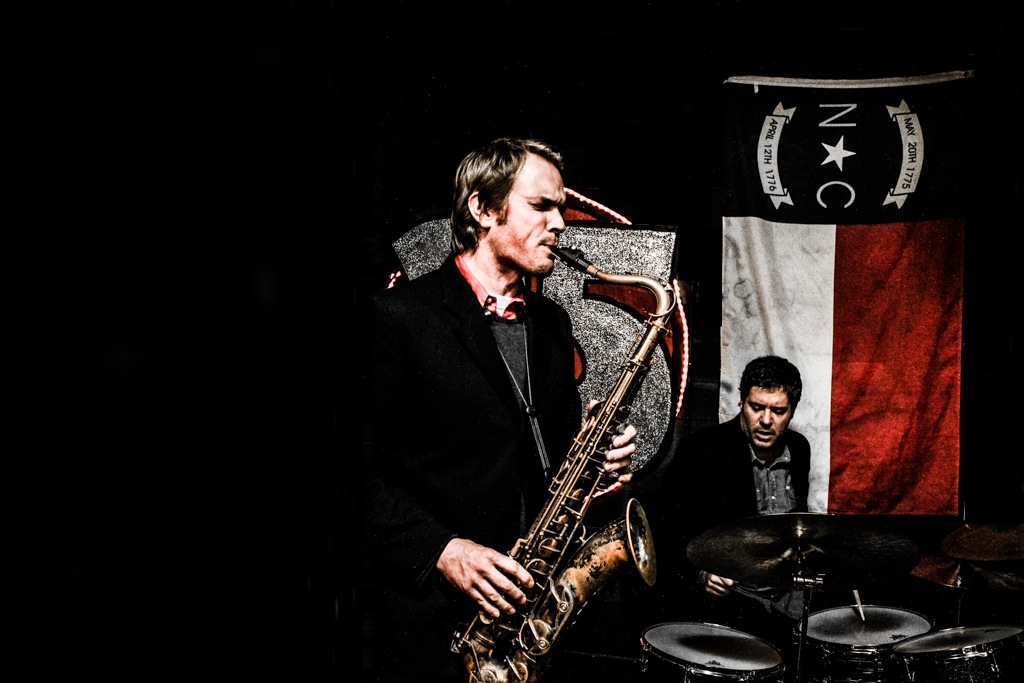 *On their sole release to date, a six-track, untitled ten-inch, Bagwell interrupts his gruff peregrinations with passages of near silence and elaborate thematic elaborations, and Nanaa never seems inclined to pressure him to pick up the pace. But on some yet-to-be-released material recorded earlier this year, they boil those same elements down into lean, melodic reveries and pithy outbursts.... - Bill Meyer, Chicago Reader

*The combination of saxophone and drums feels primal and immediate. It's great to hear Bagwell, the city's most adventurous reedsman, in a setting where he's playing against/around/through a mostly rhythmic entity, as he does on the duo's gorgeous self-titled 10-inch picture disc. On "Serpico's Dream," for instance, Bagwell and Nanaa joust and parry in ever-tightening circles before wrestling a surprisingly tight melody into submission. Their years together in The Eastern Seaboard serve Bagwell and Nanaa well in establishing the trust level necessary to create some truly intriguing and adventurous moments. - John Schacht, Creative Loafing

*At times, their playing resembles the interplay of Archie Shepp and Beaver Harris, reflective, yet strong. - Creative Loafing, Atlanta

*Creative Loafing's Best Jazz Band 2016 - This is free jazz at its finest and having them in Charlotte is a real treat.

*The undisputed local masters of ferocious, sorcerous, and way out there jazz. - Matt Cosper, CLTure

*Late last year, Ghost Trees filled the Goodyear building on East Stonewall Street with jazz. As part of the Goodyear Project, which brought an interdisciplinary arts series to the doomed structure, Ghost Trees skipped straight past combo size to a sprawling, 10-strong big band. They rolled in an actual piano; they populated the room with vibraphones and saxes, pedal steels and basses, cellos and violas for a month-long residency.

To be clear, nothing here nods to Glenn Miller - it's not that kind of big band. Insect-like fret noise and otherworldly singing saw introduce "Morse Code." "Silver Tongue" opens with Bo White's menacing bass and Nanaa's creeping percussive shuffle; Jeremy Fisher's wheedling guitar implies John Zorn, while tenor sax occasionally rises from the churn with melodic half-phrases. "Big Problem" opens the first side with darkly understated piano, the perfect film noir score, yet devolves after two-and-a-half minutes into a sputtering debate between sax and drums (and then an all-out argument between every instrument in the room). There's spontaneity aplenty, sure, but more work went into this than a casual one-off: for one, these are compositions; for another, rather than just sit down and wing it, as happens often enough, the Ghost Trees Big Band practiced.
-Corbie Hill, Charlotte Viewpoint

*Ghost Trees is usually a duo of Brent Bagwell (tenor saxophone) and Seth Nanaa (drums), but for this project, named after the building in which it was recorded, they added eight more players and rehearsed some charts so they’d know what to do. There’s still a bit of gnarl, but also some circuitous piano outflanking the wall of sound and steel guitar raising the floor of sound like a mustachioed prestidigitator coaxing his beautiful assistant’s box of concealment into the air. The performance may be episodic, but it still feels complete, so even if you spring for the double 7” you might still find yourself resorting to the download, with its three extra tracks, for a closer approximation of what went down.
-Bill Meyer, 'Still Single'

about The New Gravity:

*The duo’s output exhibits a deft balance of the outre and the accessible, the visceral and cerebral. And The New Gravity goes even further to reclaim art from the exhibit halls of academia. The first proper Ghost Trees full-length showcases a suite of eight songs honed during a year-long, cross-country touring cycle that brought the duo to New England and the Deep South, the Midwest and the West Coast and to stops in New York, Chicago and L.A. The LP finds Bagwell and Nanaa in close communication, vamping spare melodies and swinging grooves into brash crescendos. “Farewell” lets a smoldering sax riff wind itself into jagged lunges through turbulent percussion without losing its grounding or its swing. “Black Ants” recruits a string section for a dramatic extended intro (courtesy of the Wm B. Kennedy chamber ensemble) that opens space for a pensive call-and-response between Bagwell and Nanaa.

Throughout the album, Bagwell and Nanaa tease at more radical directions, but they never give in to belligerent noise. Compared to the skronky impulses and righteous din of many peers, Ghost Trees sounds remarkably restrained, the product of wide-ranging influences from post-rock to post-bop and minimalist composition to big band jazz.
-Bryan Reed, Charlotte Viewpoint

*The foundation of the album rests on the power and warmth Bagwell and Nanaa generate by themselves. The duo’s veteran chemistry is at its sharpest - and The New Gravity is at its best - when Bagwell and Nanaa split the difference between free jazz’s visceral bluster and post-bop’s cerebral discipline. “Farewell” surges forward on Bagwell’s gasping phrases and Nanaa’s lunging, coloristic tumbles, but it never loses its innate swing. “Nostromo” moves in a balladic arc, but delivers its melody in bracing gusts and meter-free form. It’s at these moments when Bagwell and Nanaa’s conversational rapport is easiest, and when The New Gravity is most intriguing and adventurous.
-Patrick Wall, Dusted Magazine

*Ghost Trees are no rookies; tenor saxophonist Brent Bagwell and drummer Seth Nanaa (ex-Indian Summer, ex-Sinker _Ed.) first got together in New York c. 2000, and they have made a number of albums for Black Saint and other labels in a trio called The Eastern Seaboard. But now that they’ve downsized and re-settled in Charlotte NC, their music is stripped not only of extra instruments, but excess activity. The first five tracks on this 10” can be circuitous, but never in the “where are we going” way that some improvisers willingly expose. No, it’s more like they know where they want to go, and they comment along the way about what Archie Shepp might have said about the trip if someone had thought to ask him in 1967. Bagwell sounds swell when he summons that phlegmy Shepp bark, but he has sufficient restraint and melodic imagination to strike a welcome balance. Nanaa moves things along quite satisfactorily, either swinging or adorning. The final track is a bit of a curveball. It’s a brief backwards-tape piece, mostly fleeting percussion and piano sounds that seem to retreat from your ears. It ends with a reverberant fade so well timed that I’d like to hear them do a whole record of tape composition. That snippet aside, this music doesn’t transform its vernacular or try to move it forward the way Ken Vandermark or Mats Gustafsson, for example, have done. But it says some things worth hearing with the established language. So get it if nude sax and drums is your thing, or get it if you like really well executed picture discs. Side one is a vintage image of heroic whalers doing battle with a breaching sperm whale. The flip side is a multi-colored replica of a coastal map with the track listing typed on. The cover is a heavy, transparent polyethylene sleeve - with a record that looks this stately, you don’t really need anything else.
-from Dusted Magazine's 'Still Single'